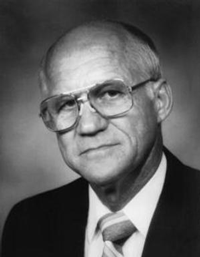 J. R. McEntyre, a retired band director, orchestra director, and music administrator, has served in Texas public schools for over forty years. At his retirement he was the administrator of music education in Odessa, Texas. Being recognized for excellence in teaching, leadership, and performance is nothing new for J. R. McEntyre. The west Texas oil patch native has spent only six years of his life outside Odessa; he attended college at Texas Tech, he was in the paratroopers during World War II, and his first teaching job was at San Benito, Texas. His contributions to the musical and cultural life in Odessa are legendary. J. R. returned to Odessa in 1950, serving as band director at Bowie Junior High. He also worked with Hall of Fame member, Robert Maddox, band director at Odessa High. Bonham Junior High was opened in 1955 with J. R. being that school’s first band director. In 1959, Permian High School opened its doors and the incredible tradition of musical excellence began. With J. R. At the helm, his orchestras and bands not only received sweepstakes awards each year that he taught, but they also received First Division ratings in each and every contest they entered. He has served as president of TMEA and TMAA.

Mr. McEntyre’s bands and orchestras have been named outstanding organizations at music festivals throughout the United States. His Permian High School Band, in its third year of existence, in 1961-1962, was selected Texas Honor Band. His marching band also appeared on nationwide television for NFL half-time performances. During his career, he was the guest conductor for many all-region bands as well as all-state bands.

He is past-president of the Texas Music Educators Association, Texas Music Adjudicators Association, Texas Music Educators Conference and the Texas Chapter of the National Bandmasters Fraternity Phi Beta Mu; has served as Texas State Band Division Chairman and is a member of the American Bandmasters Association. He was named 1985 Texas Bandmaster of the Year, and in 1987 was honored as Texas Orchestra Director of the Year. In 1988, he received an Excellence in Community Service award in Education by the Heritage of Odessa Foundation. In 1995 an instrumental music building at Permian High School was named and dedicated to him.

Mr. McEntyre is co-author of six method books, all currently published by Southern Music Company. From 1969 through 1997, he served as Executive Secretary of UIL Music Region VI, and in that capacity was awarded the 1989 Outstanding Music Educator Award by the National Federation of Interscholastic Music Associations.

Charles Nail began his music career as a young cornet player in Monahans, Texas and since that time has become a well-known music educator throughout the Southwestern part of the United States. He completed both Bachelor’s and Master’s degrees at West Texas State University and has done post graduate work in conducting at the University of Texas in Austin and at the University of North Texas in Denton.

During Mr. Nail’s seventeen year tenure as band and orchestra director at Permian High School in Odessa, Texas, the ensembles under his leadership performed at extraordinarily high levels, winning the Texas State Marching Band contest in 1982 and finishing second three other times and being selected five times for the finals competition in that event. The Permian Band was also selected as the Texas State Honor Band and was never awarded less than a superior rating in every contest and festival they entered during his time there. The Permian Orchestra was twice chosen as the Texas State Honor Orchestra and also was invited to perform at the prestigious Mid-West Band and Orchestra Clinic/Convention in 1985.

As a conductor, Mr. Nail has led many All-Region bands and orchestras in Texas and nationwide and has also been the conductor for several musical productions done in Odessa and Midland, Texas, including West Side Story, Fiddler on the Roof, The King and I, South Pacific and most recently a joint production by the Midland Community Theater and the Midland-Odessa Symphony of Evita.

Kathy L. Fishburn received her degrees from Sherwood School of Music and West Texas State University. She has taught Orchestra in Texas for 47 years.  From 1979 to 1999, she taught in Odessa at Bonham Junior High and Permian High School. She recently retired as the Orchestra Director at Tascosa High School in Amarillo, Texas. Her orchestras are consistently Sweepstakes winners and are named “Best in Class” at many festivals throughout the United States. Kathy was the Executive Director of the Greater Southwest Music Festival.

Ms. Fishburn has served as a conductor for many TMEA All-Region Orchestras on the junior high and high school levels, as well as All-State Orchestras. She has many published arrangements and compositions for string orchestra and was a member of the American Society of Composers and Arrangers. 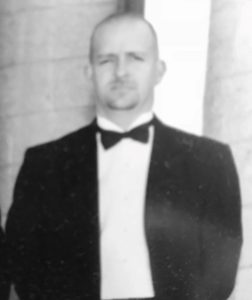